Bring Back National Service For Pensioners 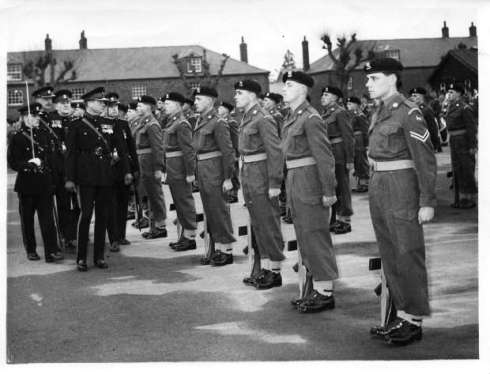 Lord Bichard, now 65, who retired at 53 as a top civil servant on a mega pension and lately Quangocrat Extraordinary is reported to have said that for the plebian classes pensions should come only with conditions attached, such as work or identified community service or some such.

This is because of the big hole that the government is currently digging in the pension’s garden where the nature of it forbids stopping.  So My Lord wants something else to fill it up.  He thinks that we are all idle, prone to causing disruption as we chase around the globe and consuming more than we are entitled to.

Those of us who have already been required in the past to undertake a form of forced labour, military, for a pittance will not like the idea at all.  Once bitten and some were badly bitten, twice shy as the saying goes.  See the photograph above, this is one from the web, my lot were less smart and more trouble.

Below is a link to John Ward’s “Slog Blog”, a retired journalist who does a full take down of the noble lord which I cannot improve on.  John during his working life made great efforts to provide for his private sector pension which has been blown to smithereens by government policy in recent years.

His experience is shared by very many, probably running into the high seven figures in total.  This has impacted directly on consumption spending, who needs Austerity when it has already happened?

Also, savings are far lower than they should be so the investment has to come from somewhere else, notably funny money.  My Lord is one of those responsible for this disaster.

In the public sector divides have opened up.  One is between those who retired some years ago before the last Labour government started making major concessions in pension schemes and throwing money at certain public sector areas.

Another is between those once in the public sector whose work has been out sourced with an effect on pensions.  A key one is between those on agreed scales and the big boys and girls at the top or in certain areas who are on fancy contracts with all sorts of extra goodies packed in.

There have been quite a lot like that around the country and these must impact on the sustainability of any scheme.  These are all people with occupational or private pensions but there are many others without who rely on the state pension.  There again there is ripe cause for resentment.

During my working life a large chunk was removed from the salary monthly as national insurance and pension contributions.  Necessarily, I and others like me felt we have already worked for our pension.  Doubly so for those in a scheme but also those who were not but did work to make their national insurance payments will feel that they have already “paid”.

But the schemes we were in, devised by the likes of Lord Bichard were in essence not like that at all, they were almost “Ponzi” schemes.  For him to come along and say, sorry you, it doesn’t work like that, here’s a broom now go sweep that crossing if you want to eat, simply will not do.  We want to know how this happened and why and who was responsible for it all going so badly wrong.

One ancillary point that will certainly not have occurred to him, nor to any of those advisers, experts or others in the cocoon is that for very many the actual business of having a job incurs real costs from earnings.

Lord Bichard and his associates will have had a lifetime on generous expenses and incomes which can withstand any real costs of travel, clothing and having to eat, cook, clean and deal with life.  In short they have little or no idea of the real financial costs imposed on low paid, no expenses, labour.

Perhaps he has not realized yet that time is an ever rolling stream and that before being carried away a great many spend a long time sliding helplessly down the bank before struggling in shallow water before the inevitable.

So rather than being available for “caring” or “community” a good many retired are already experiencing difficulties, if not themselves then in relation to others.   As I look around the real world very many pensioners are already going a great deal for others, whether family or not.

Also, and this relates to the picture above, has Lord Bichard and others like him have any idea of the scale of the management, organization and costs involved in corralling the unwilling into service and then finding real work for them to do?  It is very substantial and much greater than he imagines.

This applies to any notion of “national service” for the young as well.  It is not simple.  It is very complicated and difficult indeed.  There are unfortunate unintended consequences and it is very easy to alienate those involved; even more so when it is operated on a state run basis.

The Army was glad to get rid of National Service at the end, notably after the mutinies at the time of the campaign.  By then it was rough and getting rougher to deal with a mob of unwilling teenagers.  The Generals had become aware that service for the sake of it was no way to run an effective Army.

Here is The Slog on Lord Bichard:

If Lord Bichard and his associates could spend a few months in challenging manual work it might concentrate their minds.  Especially on the minimum wage and with no expenses and being required to eat and house themselves solely on earnings.

Now that would be what I would call “National Service”.