Where Does The Money Go Or Has It Gone? 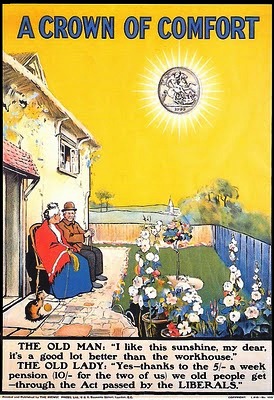 Among the many and various financial disasters of our time beyond the state of our own bank accounts, debt totals, ongoing unfunded commitments and favours owed to all and sundry are the larger questions of state finance.  These may be a personal minor matter at the moment or a larger one.  But all of us may well be a liability for the future.

At present the UK social security system is said to be derived from the period of the Attlee government post 1945 when a population has suffered years of war and before that many had been badly affected by the Great Depression.  The FDR "New Deal" of the USA is cited as the example.  But in 1908 Asquith had brought in a means tested pension for the over 70's and in 1909 this was followed by Lloyd George's "Peoples Budget" with provision for the sick and infirm.

These were followed by the introduction of "Insurance" which was not entirely national and certainly not insurance in that the payments out were not from a fund but derived from payments in as payroll and other taxation.

This was a time when the expectation of life was low, few made to the date to claim it.  And of the sick survival was limited in many cases and severe cases for the most part  did not last long.  The idea that many would see over twenty years of retirement or be able to survive long term severe disability or illness did not occur to the policy makers.

Also, down the decades that have followed political success is determined at the margins in a minority of electoral districts.  Additionally, many groups have been able to lobby politicians and government for extra help or priority or admission to the state pot of benefits.  Even minor amendments or simple readjustments invoke a blizzard of rage and new demands.

So the various schemes and benefits and entitlements and the rest have grown in number, become enlarged in form and have been extended wider and wider.  We may have lost our political and economic empires but the sun does not set now on our world empire of benefits provision.

We thought that all this could be paid for by unchecked and certain growth in the economy. We went on to think that clever financial manipulation by the state could manage it.  This did not work because of the political hindrances.  But the state put its trust in the bankers and money men to do the business.  They certainly did for us and may well have done for any real form of democratic government.

The result is that the social security schemes as they have come to be in many states are now in deep and continuing trouble with no real answer to the problems other than ones that will be deeply unpopular and for many be intolerable.  This seems to be leading to the destabilisation of governments across the world.

The descriptive term used is "Ponzi Schemes" after the American Charles (Carlo) Ponzi  in the 1920's whose ability to persuade people to pay in was not matched by his intentions to pay out with the result of a financial collapse which left him with the money and almost all the people without.

For a graphic, albeit long, item on this subject here is a link from the Mises Institute:

If indeed there is no pot at the end of the rainbow and in addition it is about to evaporate as a bright hot sun of reality disperses the haze of our thinking there is going to be serious and rapid change.

All our illusions and expectations will go and perhaps much of the structure and purpose of our governments will go with it.

Welcome to the real beginning of the 21st Century.