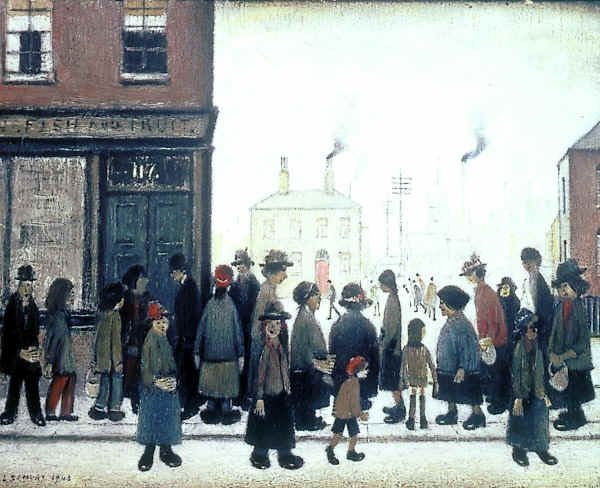 Having made some comments on the LS Lowry exhibition at the Tate a couple of days ago and with little comment around on his background, decided to take a look.  I had put his reticence about personal matters down to his job as a rent collector.  But there may have been more to it than that.

Contemporary with him and around the same general area in Lancashire was the writer and playwright Harold Brighouse.  Checking up on him revealed that he was five years older and of much the same class and background.  But there may have been more to it than that.

Brighouse wrote some popular plays about Lancashire and its life and one was "Hobson's Choice".  Later in 1953 this was made into a successful film with Charles Laughton in the leading role and an array of well known stars, notably the young Prunella Scales.  Rather later David Bintley made an very attractive and interesting ballet of the story based on music of the period, some notably from Leslie Stuart.

The title seemed simple enough, it was a well known and old saying going back to the 16th Century.  Also, the basic plot was easily seen as one of a well established genre of writing.  In this case "King Lear", amongst others, up to a point.

However, Lowry's mother was an Elizabeth Hobson and her family well known in the area for selling fancy trimmings and hats.  So there was certainly a Hobson's shop in the general area.  In the play  Hobson is a comedy turn around whom the story is told.  It is a striking role and one in which actors could ham up the comedy.

The fictional Hobson is a boot and shoe maker and shopkeeper.  Whilst LS Lowry's father, Robert, was an office worker of reasonable status his family had been in the boot and shoe trade and Jacob Lowry, his grandfather a well known figure of some standing.  He appears amongst the petitioners to Parl1ament for Manchester to become Incorporated in the late 1830's.

So Lowry's background and possibly even family connections may have been those in the relevant trading classes featured in this classic and famous comedy.  To have Brighouse so close in time and place is intriguing.

No wonder LS Lowry may have had trouble and was concerned about being taken seriously.