Crime With And Without Punishment 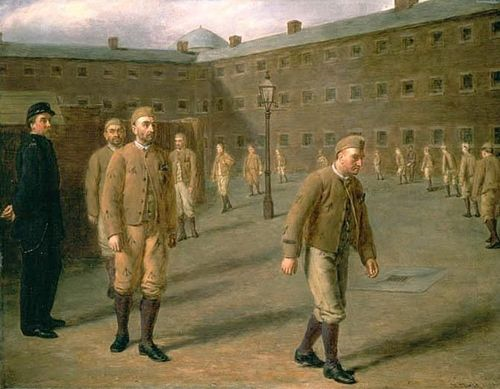 It is widely reported that our prisons are full and the demand for places exceeds supply.  So there are suggestions for new very large ones which take thousands who can be dealt with allegedly more effectively and what is called humanely and with the advantage of major reductions of cost per head.

At the same time there is widespread and perhaps justified concern over the leniency in sentencing in many cases.  To this should be added large numbers of cases which are not brought to court but dealt with by cautions or warnings.  Some offenders seem to rack up an astonishing number of offences with no custodial sentence being applied.

But the media and the net are now awash with demands to bang up and for a very long time persons engaged in activities for which they were once praised and admired by those who now decry them.  They are bankers and other financiers and those who were tasked with managing the National Health Service.

The one has lost billions, perhaps trillions in money the other thousands of patients who might have been saved and perhaps tens of thousands damaged beyond repair.  They are not alone.  The Supreme Court has said that the families of lost soldiers can go to court.

The leading cases here are men sent into battle without the equipment they might have had.  The feeling is that there is a common thread to all these disasters and that is alleged criminal conduct of those in charge.  There are a number of questions at present about the way our defence contracts are handled.

It is perverse that the rights legislation, intended to protect privacy is said to have been a useful tool to ensure information could not get out, those responsible could not be identified to respect the rights of those they killed and those who objected and tried to call attention to the issues could be fired or subject to very rough handling.

The puzzle is even greater.  For example in recent decades there has been a huge reduction in hospital and allied facilities for those with severe mental conditions,  For them "care in the community" was to be the answer.  When it came to priorities it was their fate that this category rated low for those engaged in providing public and complex medical services.

The upshot of this is that large numbers found themselves in trouble and packed off to prison where they neither received care or much support from the community they then found themselves in.  A number have found themselves in and out of prison.  Others are numbered among the homeless and other floating people always on the verge of breaking the law either by accident or design.

In "The Guardian" on Thursday 20th June, Joris Luyendijk pointed out that the problem with controlling the banks and allied services was that within what were supposed to be managed organisations those put in charge were not in charge but simply holding the ring to what amounted to badly run franchise operations.  Equally, managerialism applied to the NHS has had much the same effect.

In short the business of who is a criminal and therefore ought to be in prison has gone chaotic both at government and institutional levels of all kinds.  In the past in other times and in other places when this has happened other solutions have been attempted.  In the 18th and 19th Centuries Century Britain went in for hanging and transportation.

Other regimes with differing forms of government and control went in for other methods.  At the moment in the UK our contraction of defence services, couple with a good many former troops with limited futures means that there are a lot of locations available with all sorts of potential.

When will someone come up with the idea of big facilities with a wide brief to pack all and sundry of the difficult cases who are at the margins?  There many places to turn over to this function.

Welcome to the Catterick Gulag or the Bovingdon Labour Camp?