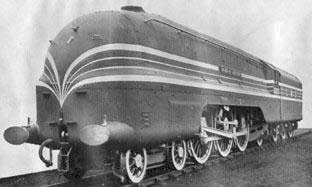 Today there are celebrations for the 60th anniversary of the Coronation of HM The Queen. Any memory of the 1937 one is now in the deepest memory archive, possibly on a neuron system long since deleted and therefore effectively lost for good.

For the 1953 exercise in hubris it is possible to fake it from the web.  It would not be the truth in that rather than spend hours peering at a small screen littered with interference there was table tennis to be played and the back hand to be improved.

The picture above is that of a Coronation Scot class locomotive of the LMS built in the late 1930's.  It is streamlined very much the alleged technical advance of the period.  By 1953 all those built like this were stripped of the extra streamlining for reasons of economy.

In one TV item gushing about the wonders of the UK at the time, full employment was held up to be one of them.  Indeed, if you forget all the men in the armed services trying to prop up a collapsing Empire.
Also factor in the huge numbers engaged in purely manual work, many because the investment could not be made in so many industries to improve production.  Then there was the massive underemployment of existing workers arising from trade union requirements.

Much was made of how you could leave a job on Friday and find another on Monday.  But this depended where you were and while it might have been possible in many manual and some skilled trades there were swathes of the economy where it simply could not happen.

Rationing was on its very last legs but because of the export drive waiting lists were common for many consumer goods.  Also, in many shops the habits of war time shortages meant there was still a culture of looking down on the customer.

Money was still very tight and credit regarded as a privilege.  The pictures of London and loyal subjects have a fun day out are all very nice in colour.  But much of the country was grim, mucky and in London itself even in The City there were still rat ridden holes with debris as a result of The Blitzs.

For many of my age group it was the American media and film that set the example.  If not then our own ideas about how things might be.  It was not the posh show going down in London that the BBC and others urged us to follow at least out of the loyalty to Crown and Constitution.

The trouble was that they were in the process of being betrayed by the political class and main media of the period.