I'm The Man Who Broke The Bank 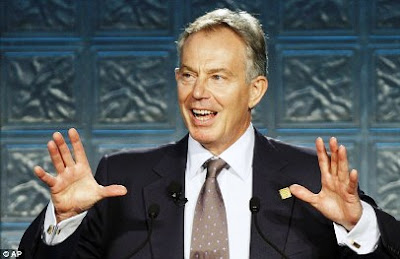 There was a combination of telling stories in the media today.  One was the confession of Merve The Swerve, aka Mervyn King, Governor of the Bank of England that they did not do the business when the latest Great Crash was impending.

The other was living proof that there will be an Apocalypse in 2012, that is The Return of Blair Force to wreak terror and despair on what is left of our nation.  Tony has decided that the remains can be picked over for a financial opportunity.

It is easy to suggest that they may both have been on the Weetabix for breakfast, a commodity notorious for its past advertisements suggesting that consuming this type of processed grain conferred powers of strength and action beyond ordinary humans.

However, Weetabix is now Chinese owned, the investment company in whose hands it has been the last few years have flogged it off to ensure their return on investment.  Perhaps they had deduced that the declining incomes of the population will mean a return to gruel rather than over priced breakfast foods.

It is possible to say a lot about Blair and this blog already has done, but I think the best for today is this old music hall song from Charles Coburn, the title above:

As for King, again it has been said before.  But this time the trail leads back to Goldilocks Brown, Brother of Lehmann and the man who put the gold into Goldman Sachs.  Light touch regulation is what he decreed and what we had.

King claims that nobody anticipated the scale of the potential crash and that it is only with hindsight that it has been possible to work out what happened.  This is broadly the Mandy Rice-Davies defense of “Well, he would, wouldn’t he?”  See Wikipedia for her story.

If so, how come I was talking to a leading person from the Bank of England a handful of years before the Crash in the board room at Ings bemoaning the lack of memory in The City of the early 1970’s Crisis and asking what would happen if oil prices shot up for some unexpected reason.

Moreover, there were a number of others around the world taking a beady look at what was happening who shared an interest in financial crashes of the past and who were far far better qualified to make their disquiet clear.  They were routinely rubbished and ignored.

The trouble was that those in charge and in the financial world had subscribed to the new creed and dogmas of modern management, computer driven trading on the basis of complex mathematical formulae whose data base was inadequate and often distorted and the gambling away of national credit facilities.

Add to that extensive fraud, manipulation of accounts and outright deception by both politicians and all their lobbyists and the consequence was that King, Blair, Brown and all the others did not realise that it was not simply a question of failing to predict a crash it was the failure to understand that they were making one certain.

Enjoy you breakfast, if it’s Weetabix, Alpen or Ready Brek you are doing your bit for the Chinese economy and possibly Tony Blair.