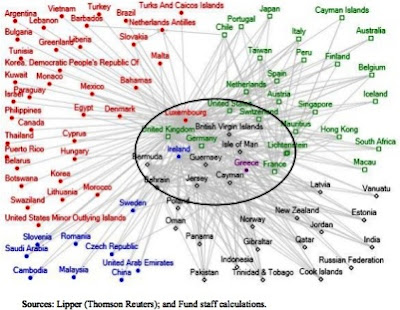 The 2010 diagram above originates with the International Monetary Fund, the IMF, then via Thomson Reuters and Tax Research into Richard Murphy today’s posting on that site.  It tries to show that the problem of is complicated.

In the meantime we have governments, international bodies, the EU and leading states attempting to deal with a situation that is developing and becoming more complex than their thinking and functioning powers can keep up with.

In short it is truly chaotic.  Additionally, around all those many financial entities, expressed as political jurisdictions there is a great deal of money movement and the rest that is simply not known nor accounted for.

But it is not the political entities that are controlling all that money and money denominated instruments of financial trading of many kinds.  It is a range of financial corporations few of whom know what they are doing only why.  That is to survive at least and at best extract fortunes for the few.

It is easy to lose sight of the detail (or the fine print) and as in all things it is often these that matter, as your insurance company will remind you when you make a claim that is turned down.

The Slog has picked up on one today and has discussed it in a typical wordy post that at least tries to ask the questions even if the answers are far from clear.  This is because the UK Treasury has just suddenly and without discussion or publicity of any kind, revoked a 72 year old restriction on trading in negotiable bonds.

In short, a restriction that applied to 21 former enemies (so few?), largely in that affected a number of monetary instruments no longer applies.  That this was not done in the last fifty years is an interesting question.  The main question is why now and in the middle of a growing crisis that is out control?

It has occurred also at a time when the Home Secretary, Theresa May, has been severely criticized for suggesting that if large numbers of Greeks head this way with any form of money they can lay there hands on, they should be spurned entry.

There is the other question of where they might go.  There are already numbers of Greeks with us, notably in , with or without tickets for their local Olympic Games in a few weeks.  If many more turn up with a lot of money to use then the existing property bubble may go fit to burst.

The politicians can only chatter and try to dominate the media and allocate blame.  They cannot do much; the doing will be done by the financial interests and their associates.  Other doing will be by Greeks voting with their feet.

Apparently, the Olympic Torch relay today went to the top of .  That must be an omen of some kind.  As the Oracle at is no help these days perhaps the torch should be redirected to the Shrine of St. Winifred at Holywell in Flintshire.

According to Wikipedia she is the “unofficially adopted” patron saint of payrolls and payroll clerks and may be prayed to for guarding against unwanted advances.

It is about the only thing that could work.