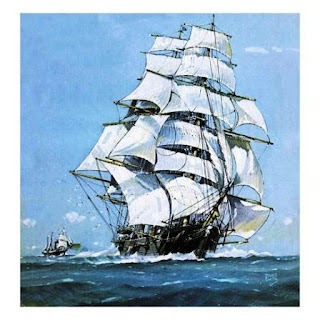 In 1869 when “Cutty Sark” was built on the Clyde at Dumbarton, on launching she went down river for some final work to be done in . Two of my Great Great Grandfathers were resident there with their families, one a ships carpenter, born in Leith in 1815 and the other an iron worker born in Ayr in 1808 who married in .

Did either of them put in some work on the ship? Given the number of other family connections, I like to think that someone did. Given their home addresses adjacent to the docks and yards they could hardly avoid seeing her or marvelling at her construction.

Given the number of men who did work on the vessel in construction originally and later or sailed with her on the many voyages, there must be quite a number of people around the world with a connection.

It is possible to complain that the work and events down the years have meant that what is left of the original “Cutty Sark” is limited. But it was a working ship and the ropes, the sails and a lot else have to be changed. The wear and tear of service inevitably meant reworking and replacements.

But the survival of what we have tells us of the incredible skills and strengths of the men who built and sailed her and something of the abilities of our past generations. Above all she was a merchant ship manned by ordinary men for ordinary trading purposes. But in these years when the clippers were at their peak, first the coal burning iron ships were coming into to use to be followed by oil burning steel. Now she is a tourist attraction located on The Thames and will never sail again. Moreover, her survival in part is due to Royal interest and persistence in wanting her to survive. The Duke of Edinburgh was a naval man and his body language never lets us forget it.

When there is a stiff Sou’ Wester, wet and with the white flecks on the waves of the Thames is the time to imagine her coming in with cargo.

But if only she could sail again.