Dreaming Of A New World 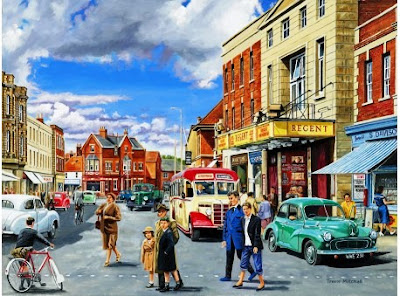 Who wants a “Big Society”?

There were difficult times before but that was before big was beautiful in the shape of retailing, banking and government.

Now I want my Little Society of the past back. It was cheaper, close at hand and a whole lot easier to deal with. Here are just a few thoughts:

Off licences that sell beer by the jug in quantities you ask for and not in expensive packaging.

Policemen who know which town or village they are in without having to consult a sat-nav or ask for guidance from Control.

Meat retailers who are butchers who know one end of a cow or pig from the other.

Post Offices within walking distance that sell stamps and have collections with a parcels service that does not send everything to to be smashed up on the conveyor belts.

Banks nearby that keep your accounts accurate, pay interest on savings and get on with dealing with the customers instead of regarding them as sales targets.

Greengrocers round the corner with a choice of locally grown fruit and vegetables.

Local councils who tell you what they do, use English and not management speak like verbal diarrhoea and have people who can give answers with councillors who do not think they are the Court of Versailles.

Pubs that cater for adults and do not require you to spend up to fifty quid on microwaved packaged junk food supplied from central Poland so you can sit down and have a drink or two.

Doctors and nurses who sometimes look up from their computer when they are talking to you and work in surgeries which do not smell like a 19th Century Parisian brothel after a bad night.

Shops which sell you what you want and not what their marketing or distribution systems tells you to have.

Appliance retailers and servicing where the men do not have to come from the other end of the country and the parts ordered from .

I will leave it there and suspect that others could think of a few things more.