The Scramble For Europe 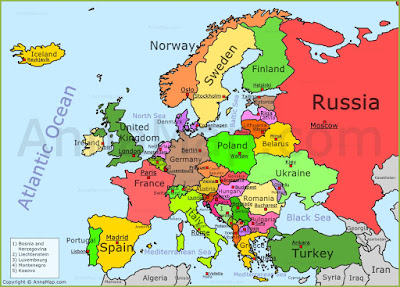 The six part series about African civilisations run on BBC4 from the PBS channel in the last part of six dealt with the carve up of Africa by European powers in the 19th and into the 20th Century. At one stage, the newly created German Empire, called a conference at Berlin in 1884 of the key 16 European states involved.

There is a part of Africa in all of us according to this recent study reported in Science Daily but in the late 19th Century the ideas about humanity by the theorists gave substance to the rulers of Europe adding parts of Africa to their domains. Otto Von Bismarck, Chancellor of Germany, did not want this to trigger wars and conflicts between European states for the riches to be had.

But in 1888 his Kaiser Wilhelm I died, his successor Frederick lasted only three months before dying so Kaiser Wilhelm II ruled. He dumped Bismarck in 1890 and set out to change the course of history on his own terms and by 1914 and after a series of crises a major European war broke out.

The term for all this was the Scramble for Africa, not unique in that in the continent down the millennia there had been many wars, empire building, wealth taking and political and economic flux and ways of life and civilisations almost forgotten.

With the Europeans it began with the Portuguese and it was not long before others followed. They began with trading posts, which became towns, which then had rich merchants who needed defending and used both local and mercenary troops from Europe. At the same time they became parts of local townships and capitals.

It was not long before these became involved in internal conflicts to their own advantage and soon enough the outsiders came to take control of some areas and in others had indirect rule by the power and influence they exerted on the local rulers. These often welcomed the outsiders as essential to their economic and social futures.

More Europeans came in to settle and Africa became a subject continent with few exceptions and the structure of its society, institutions etc. became more European and less African to the point where the old was almost or completely lost.

But remove this to the late 20th and new 21st Century and change the pattern from Europeans taking over to others taking over Europe, perhaps from Africa but also from other places. Then follow the money and who has effective economic control. Not least look at the patterns of movement and settlement occurring In Europe.

Where do our finance, investment funds and other sources of infrastructure investment and other key areas come from? Who is dictating the key financial decisions and on what basis? Who provides our energy? Who do our politicians run to for advice, decisions or to sort out their many messes and conflicts?

Like the Africans of the past the Europeans of the present are seeing a Scramble for Europe and who can tell where it will end and who will control which parts of Europe by the mid 21st Century?