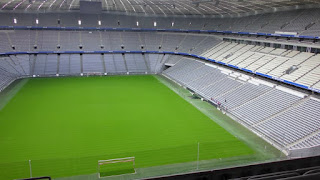 Given the extensive coverage of the Russian World Cup perhaps it is high time GDPR, Privacy, Inhuman Rites and all that were applied to football  This would be along the lines of the following.

An unspecified team to play against another team from a far away country later in the week has been announced.  Following an appeal against the team manager granted by telephone call to a High Court judge by the distraught WAG of a man who has not been selected, an injunction has been granted.

This is on the grounds of privacy to avoid hurting his feelings and his prospects of a highly profitable imminent media rights agreement.

The manager would not comment save to say it would make life easier in the after match analysis.  The spokesman for the football authority concerned said “Who reads the programmes anyway?”

Spectators will be blindfolded and assisted to their seats.

Representatives of the media will not be permitted to name players nor give any description that might allow identification.

The referee and officials will not be permitted to point to players or to record their names or any decision.

The judge will be available in a hospitality suite to give injunctions, guidance and committals for contempt of court as necessary.

No result of the game or associated games will be announced until the formal appeal is heard in court sometime late in 2021.