Hot From The Press 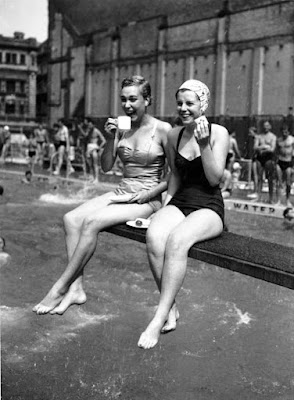 The latest heat wave is being compared to that of 1976 for the most part, possibly because there are many people from that period to be able to comment and compare. One that is less remembered because you need to be older is that of 1955.

The picture above is said to be of office girls at the Holborn Oasis outdoor pool in central London. I have my doubts. The pool in those days would have show girls and dancers there from the many theatres close by. Office girls and nurses had strict hours and short breaks during the day.

Students, notably ex-servicemen, fleeing the serious discussions of female students about academic stuff, would hasten there for ordinary conversations. They might also learn about contemporary and other culture, for example the exact steps for male partners in a can can routine.

In 1955 itself, I was in Germany, where the heat was at roasting level. Luckily, my unit had a few old India hands and veterans of the Desert War. The G1, Chief of Staff to the General, had served with Skinner's Horse both up the Khyber and in the desert.

So as soon as the heat was on we were all into shirt sleeve order, compulsory water drinking, regular breaks and a very different timetable, sometimes working at midnight but resting at midday. The German's thought we were mad.

But as we liked to point out to them, we had won the desert war while their casualties for heat stroke were a great deal higher than ours. Also, after June 1944 in the warmer period in Europe we had water when they did not.

So now in the 21st Century, it is back to the old routine in a way. And counting the cost, all those fans going. Have a nice day.