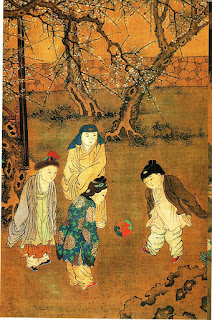 There's halitosis on the pitch tonight, the linesman's jamming and the ref' got tight. Punch up, punch up and to hell with the game. The World Cup Final promises to be another grim struggle of alpha male domination. There are better ways of spending the time.

At least we will be spared all the flannel of our historic problems with the French. The battle scene from Laurence Olivier's "King Henry V" is on Youtube if you like all that sort of thing. Rather like a Saturday night on the High Street but more organised.

As in many things the game we have now is removed from its origins in this country. The 1863 idea of making rules worked for a while but is falling into disuse. Perhaps we might look for the historic alternatives.

The Chinese, as ever, seem to have been there a millennia before in the game of Cuju, see Wikipedia and picture above. Probably, there are still places in China some locals play a kind of equivalent.

Is it now time for an entrepreneur to copyright rules, put some money into it and see how much the TV satellite providers come up with?

It might have made a better alternative to the World Cup than blokes chasing each other on bicycles.