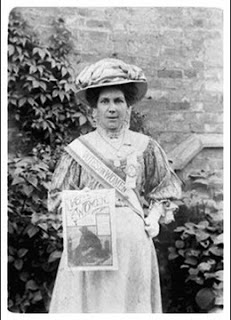 The National Archive have an Event on Tuesday 20 February for £10 at 1800-19:30 at Kew titled "Did militancy help or hinder the fight for the franchise?".

It says: "By 1912, militancy associated with the Suffragette movement hit its peak, with regular arson attacks and targeting of MPs’ houses. But did these tactics help or hinder the cause?" The debate will be with Dr. Fern Riddell, Elizabeth Crawford and Professor Krista Cowman.

This year is the centenary of the 1918 Act which first gave older women the parliamentary vote and to which attention will be devoted. I suspect little or nothing will be mentioned about the extension of the franchise to the 40% of men who did not have it, like my grandfather.

The importance of this was that it brought into the polling booths a great many voters for the Labour Party, who then supplanted the Liberals as the alternative to the Conservative Party. In theory the Labour Party ought to have become the rulers forever by a long way, but as it happened enough enfranchised women preferred the Tories.

Once the Gladstone Liberal government had passed the 1884 Reform Act which enabled 60% of men to vote, the nature of the population distribution and demographic structure meant it was inevitable that the franchise should be extended further.  Quite why it took so long is a complicated question.

Perhaps it begins with Gladstone, who hung on too long, and The Irish Question which dominated politics. Also, there was the sheer scale of all the difficulties of The Empire as well as the growing  European concerns. There was too much going on for a divided Parliament to deal with effectively.

Did the elements on the Left and the Pankhurst's poison the debate in a way that deterred many politicians, reformist or not, of the Centre from touching the subject? It allowed troublemakers in the House of Lords to make more trouble and this meant the issue of The Lords had to be dealt with first.

The statue erected in Leicester to the memory of Alice Hawkins, picture above, is a response and a case in point. She lived between 1863 and 1946 and was a leading suffragette closely associated with the Pankhurst's and that part of the movement given to violence, arrest and imprisonment.

Alice, born Riley, and a shoe machinist, in 1911 was one of those who demonstrated by refusing to take part in the Census of that year. But her husband did, and this was one of life's surprises, because fifty years later we were across the road from their address in 1911. He is listed as an invalid. Whether this was any illness or the result of breaking his leg when thrown out of a meeting in Bradford where Winston Churchill spoke and he heckled is not known.

By 1939 Alice was a widow, incapacitated and living a short distance away by the Welford Road in Leicester, a couple of bus stops from the Tiger's rugby ground and the hall where both Attlee and Churchill spoke, and the Filbert Street of Leicester City. City have since taken over what was once common ground for a new stadium.

She would have been pleased in the 20's and 30's to see the new schools for girls built by the local Council, grammar and secondary modern, and no stinting in the science and practical subjects. Also, the new University College was close, mixed and under an Attenborough as Principal. Did our David ever know about Alice down the road?

When archaeologists of a future millennia are digging around the habitations of our humanoid species of the 21st Century they will come across statues adjacent to large centres where many gathered. Probably, they will conclude that these were the major tribal leaders of our times.

Should anyone suggest that they were simply managers of some form of game being played at these places they will be regarded as being flippant and ignorant of the truths of history. The one certainty is that humans like their idolatry although our choices can change.

There is an irony in the story of Alice. She did time in prisons for the breaches of the law. But her family were not always factory workers. Before her father moved from Stafford to Leicester he had another job, he was a warder at the local gaol. I recall the shoe factories of the past.

We had one close by which sold off salesmen's examples or "seconds" with a fault in the leather or machining. They were a real bargain and kept me well shod at a low price. The ladies or "girls" on the machines were a strong minded lot who demanded respect.

No wonder the men wanted to keep the vote to themselves.