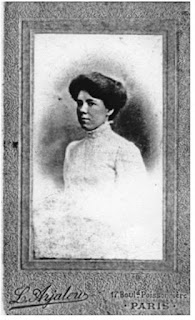 The marking of 2018 centenary for when the first women were eligible to vote has been dominated by the claims that the Suffragette group of women devoted to violent action etc. are the ones to thank. As so much of the "history" is drawn from the media of the time it is not surprising, it is easy to source and to deal with.

One large group of women who were felt to deserve the vote were those who between 1914 and 1918 went into the factories and service industries to take the place of men who had joined the Army and Navy. There were others as well who deserved it.

When young I knew a number of people born in the period 1860 to 1890 who were adults during the time of the Suffragettes. In those times past people used to talk to each personally about all sorts of things. It was always interesting to hear of their pasts. It does not make me a primary source perhaps but it does give some insights.

One lady I knew well, see above, from an ordinary working family was highly convent educated, multi lingual and a governess to families of high standing. She was stranded behind the German lines on the invasion of 1914 and during the war worked for French intelligence. Other women in her family were educated and became head teachers of elementary schools etc..

In their communities they became active in the advancement of the young in education and learning and in reform in general for the betterment of the labouring class. In 1940 they were responsible for working to help the French stranded in England and were thanked by De Gaulle.

The Liberal Government coming to power in 1906 had a lot to deal with. The Lord Salisbury Conservatives had made some reforms but there were too many problems to be dealt with in too little time, given the difficulties in the mining and other industrial areas, rapid economic change, the imbalances in the constitution, the radical changes in foreign policy and the demands of Empire.

In 1882 Gladstone on taking office said that it was his mission to pacify Ireland. He failed to and by 1914 the problems had increased and become more complicated. He also fudged The Egypt Question that led the UK into more liabilities. The 1884 Electoral Reform Act had been a compromise that created more problems than it solved, none of which has been dealt with by 1914 when this may have been on the long list to be addressed; not least because of the reform of local government.

There were high level pressing issues especially in Ireland. Before 1911 the Liberal Government had real problems. In the Tory House of Lords about two hundred peers could paralyse the Liberal Government. They attempted this with Lloyd George's Peoples' Budget of 1909. The reality before then was that the Lords would block a franchise bill giving the vote to the labouring class of men and to women, even the highly educated and property owners.

It took a lot of time and politics to deal with the problem of the House of Lords and in the meantime the activist and violent suffragettes fouled the nest. In attacking the government and members of the House of Commons they were alienating people who might have wanted to give the votes to women.

Similarly, out there in local communities, sensible, responsible and educated women working and housewives, busy in their churches and home areas and some at national level who wished to vote but under no circumstances wanted to be tarred with the Suffragette brush and its violence. They became a silent majority.

One reason is clear. The open London of the day had become home to numbers of extremists, anarchists and others. There is the famous coverage of Churchill at the Siege of Sidney Street in 1911 (see Wikipedia) as police and army fought on the streets to deal with anarchists in alliance with criminals who defied law and order.

By 1911, Lloyd George had finally managed to have his budget passed, and the House of Lords had been taught a lesson. So what new reforms could have been put forward that year? The extension of the franchise might have been one of them. It would be difficult to give it to the men labourers while excluding women entirely.

But this was no longer a simple matter of right or justice or fairness or a straightforward next step in progress. In the minds of most people, the Suffragettes had become linked to the anarchists from Eastern Europe, revolutionaries and the criminal gangs that had come to take over some of the poorest districts of the large cities.

Did Lenin when in London in 1908 ever take tea with the Pankhurst's or any of their friends? Look at the "Workers Socialist Federation" in Wikipedia for some interesting reading on this part of political history that seems to be forgotten.