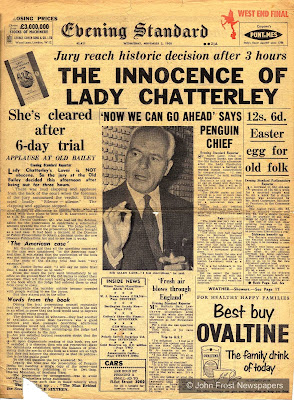 Those of you who have not been trapped underground or lost in some impenetrable forest will be aware that in the current media there is a lot of talk about the proper relationships that men should have both with women and with each other.

Not only talk but revelations, gossip, allegations and who dun its rule the headlines. Even the government is tottering with shock, one among many. For those of us who have other major interests, sport, Xmas rail services, war and peace, it is all very tiresome and predictable. But it is only to be expected.  How did it all begin?

One item in The Telegraph points out that it was in 1960 that in the Courts it was ruled that the book "Lady Chatterley's Lover" by DH Lawrence could be sold to the public because although certain words were used, it was in context and therefore the book was not obscene. Also, because the author was a man of the people, coal miners, no less, it was only to be expected.

Other things were going on around that time in popular culture. The film makers up against a rapidly expanding TV needed shows to pull  (if that is the right word) in the audiences. Within TV the introduction of commercial TV and the battle for audience figures also triggered a race to the bottom (oh dear, another wrong word?).

In the 60's and 70's then it all began to hang out, to use the current phrase, there was talk of a moral revolution and the end of Victorian morality. Except it wasn't quite like that at all. It has all been there before except out of view, below the counter and in private, up to a point.

Biographers of the good great and famous of before tell us that far from being persons beyond reproach and of the highest morality a good many of them would have been quite at home in the late 20th and early 21st  Centuries in whatever activity you care to mention. But then it was not claimed to be a desirable norm or for all.

Our present political class is largely made up of the children of the 60's to the 80's, growing up in a more limited media world but one of its time. What we think of as traditional morality was not only on the wane but among their contemporaries was not one practiced. It, was a world of slappers and slapped in many ways.

Now, suddenly, while we do not have much of or seem to want traditional morality, for want of a longer and messier term, other imperatives have arisen. These relate to the world of our times when both ancient religion and severity of personal contact are creating a new norm for public and private conduct.

The world of DH Lawrence, 1885-1930, and his book seems very far away and ridiculous in the shock of a lady of the manor shacking up with a gamekeeper. But now the gamekeepers have all gone.

And we are left only with the poachers.