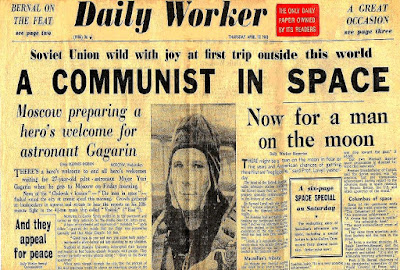 The TV channel RT, Russia Today, has a programme hosted by George Galloway (who?) a former politician famous for saying a great deal, many feeling a great deal too much. A few of our politicians etc. have appeared on it. The fee is said to be a very good one.

The programme is called "Sputnik", because RT intends to orbit the world with it as a must see news item for the masses displaying that Russia is still a force to be reckoned with. The name comes from the space mission of April 1961.

One avid viewer is John McDonnell, the Labour leader in waiting, who wants to nationalise everything that moves. Apparently, in order to flee capitalism when it collapses he has a small sailing boat named "Morning Star".

This is the name of the ultra Left daily newspaper. Once it was called the "Daily Worker", but when it became clear that in 1966 it was  more written and read by the London bourgeoisie of the Left it was changed to something more inspirational. The workers were saving up for a deposit on a house.

The web is a wonderful place and from it came the picture above of the "Daily Worker" issue of April 1961 which headlined the Soviet space mission, the first manned flight to make it outside the Earth. Yuri Gargarin was the hero of the day, rightly, in this major step in science.

Look across the picture above, however, to see what the UK ultimate space guru, Professor Bernard Lovell, has to say.

You might just make out that in referring to who would be the first to put a man on the moon he states that the chances of the USA doing so were now negligible.

I wish I had put on a bet on that one.