Kicking Out Of Touch 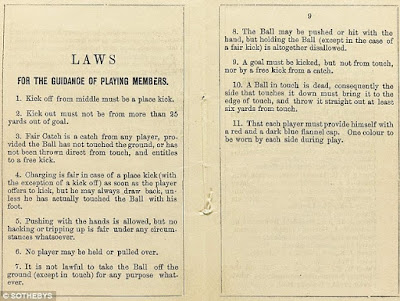 At 2.00 p.m. in the afternoon on Saturday, 29 April 1950, I first watched television, invited by a neighbour for a special occasion. The Sutton Coldfield transmitter had opened in December 1949 to bring TV to the outer provinces.

At least to those who could afford four or five weeks average wage for a set and then the cost of the big aerial and fittings. The box took up a large part of the room and the size of the spotty black and white screen meant you had to get up close and near and squint.

The occasion was the FA Cup Final, a poor game with a lot of heavy tackling and little skill. It was not helped by a referee who had put on his reading glasses. HM The King was there which meant that the commentary was of the gruesomely deferential of the time.

Before the game there was the wailing community singing, thought to be good for the masses, culminating with "Abide With Me" conducted by a hyperactive man on top of a pile of scaffolding. I could not abide it, which offended others because I was supposed to like it, the BBC said so.

Today it is evening, the sound is radio music the sight is football on the screen. It is now a long while since when watching it I have listened to or endured a commentary. The football is habit, a reason being that you can get a run of 45 or so minutes without a long loud session of advertisements, usually, that is.

On many channels an hour or two of watching means 15 to 20 of mind bending and eye straining noisy items that put me off their products for all time. So we rarely watch much as screened but use the box to replay with fingers poised over the remote to skip the advert's or whatever else will remove them.

The game I am watching today is similar in the rules, pitch and number of players engaged. But not much else. In 1950 we had another neighbour on the street of terraced houses who played for our local second division club who was also invited. He could not afford a TV, unless the club directors bought one for him as a backhander.

He was one of the lucky ones, on retirement he managed to jump the queue for a council house and was fixed up with a manual job in the building department. The mansions and  property portfolios of our leading players at present could only be a wild mad dream to the players of the time.

My particular problem with watching the footie is not all this history and remembrance of times past is that it is becoming both boring and confusing, two things which often go together. The squads and substitutions mean that you can never be entirely sure of who is on the pitch. Moreover, the nature of player contracts and scale of movement neither are you sure of who is playing for who or why.

Above all it is now all the science and statistics applied to tactics and the organisation of the teams. It has become more and more predictable. The babbling explanations of the experts do not help but only add to what seems to be the irrationality of the whole manner of play.

I am no longer just watching a game of footie I am in the middle of a complex debate centering on the numbers, forms of movement and general strategic implications. It is like watching a documentary on a military campaign of history only less informative and more given to theory than practice.

One matter that does strike me is that the game is supposed to be about scoring goals. Yet modern systems demand less attacking and more defending players than in the past. Now it is common for a side in the opponents half to back pass to their own goalkeeper or deep defenders to start all over again.

If the football bubble does burst then the implications could be significant, especially for satellite TV. It is the hinge on the door of Sky TV. If I decide to pack in the football and I suspect many people are close to this decision as well, I do not need Sky TV. Without the Sky money the incomes of major clubs and players will collapse.

Another feature of the football on TV is the extensive advertising of gambling products and companies. Many of those sponsor clubs. It is everywhere. How much of this gambling is taking money away from savings and consumption? There must be doubts about how long this can last.

It is not so much watch this space, it is that it might all suddenly be sent off.