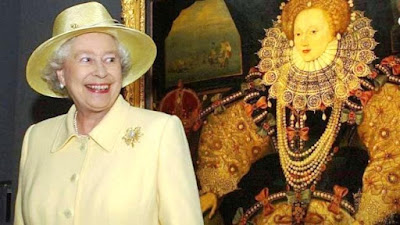 The Madrid Opera have done the Benjamin Britten opera "Gloriana", shown on Sky Arts, about Queen Elizabeth I and her affair with the Earl of Essex which went badly wrong. Whether this is to signal that Spain is part of Europe and so should we be or that they think the sooner they are rid of the Brit's the better is an open question.

E Two is not an opera fan, although duty sometimes calls, but "Gloriana" is serious and heavy and a long sit. She was not best pleased, it had been a busy week. Neither was the audience of aristocrats who barely applauded.

The BBC at the time was telling us all that we should all join in with the various celebrations. But when we switched the wireless (!!!) on we lasted about twenty minutes and then it was off to the pub for a couple of stiff black and tans to restore the nerve endings.

What E One and E Two shared was the passion for hunting. But E One with a fine hunting lodge at Chingford was untroubled by peasants moaning about the damage to crops and the death of wild life and E Two and her family have had to stick to gentle rides in the park and none of this chasing foxes and stags, jumping, following the hounds and banging away with noisy guns at birds.

There is a lot of music about hunting but an evening of Tally Ho was perhaps lese-majeste. What is a puzzle is why Britten was chosen to do something for The Coronation, or indeed why have an opera at all. But after the death of King George VI in February 1952, it was decided to show the world that Britain was still Great, up to a point, and that a big buster Coronation was the way to show it.

Typically, it meant fifteen months to organise something that might have been done simply in days, or with a more ceremonial in three to four months. As ever the bungling had a great deal to do with politics. The Tories with their narrow majority wanted a big bang patriotic show piece of everything firstly as a reason to keep them in power and secondly to be part of the run in to the next election. The Department of Bright Ideas ruled supreme.

There could have been a evening aligning the music of the age of E One with that of E Two which would have been much easier on the ear and without the anguish. William Walton was around and might have been a good choice but he was embroiled in trying to finish his "Troilus And Cressida", which did not suit.

One of the composers of that era was William Wordsworth, who we now hear little of but whose style and interests would have fitted the bill a great deal better. But he was not "modern" and Scottish and may have been inclined to have little sympathy with the world of E One if this part was needed.

Britten, following his major success "Peter Grimes" (also not a lot of laughs) and other works may have seemed the obvious choice. "Albert Herring", "The Little Sweep" and "Billy Budd" had also been written and he could clearly come up with a score etc. in the time.

What was not seen in his works was the dark world inherent in the stories which emerged in "Gloriana". Also, that it was based on the text of a play by Lytton Strachey should have put up the warning signs. If that then it was going to be a serious evening.

If it was to be fun, then it might have been better to go back to Shakespeare in the form of Verdi's opera "Falstaff". But we were supposed to be on a Great Britain roll. Stanley Matthews had just won his FA Cup Winners medal, Gordon Richards had ridden a winner in The Derby and so on.

A few days after the Coronation, the Prime Minister, Winston Churchill had a major stroke from which he never fully recovered. Anthony Eden had the reins of power in his hands and was determined to show the world that Britain mattered.

So in 1956 we had the Suez Crisis which showed it was all over. Perhaps Britten was more right than wrong.