Counting Out The Past 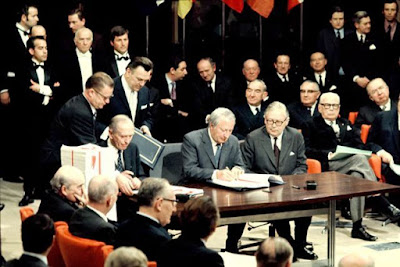 This one goes back to 2003 and used in 2005 titled "Forty Years On When Afar And Asunder". It is now fifteen years old and still relevant. It says:

“Parted are those who are singing today. When we look back and forgetfully wonder what we were like in our work and our play.”  Forty years ago, local government was reformed by the 1972 Act, the new system was installed on 1 April 1974 and by 1976 the UK was broke and in hock to the IMF. Probably you need to be something over 60 to recall the scale of the mess we were in and how we got there.

The words are taken from the Harrow School song, Sir Winston Churchill would have known it, but by 1974 his Great Britain had gone never to return. Now in 2012 the United Kingdom that replaced it is going and also will never return. The details of the mess we are in now and those in 1974 differ but the principles apply.

When the new authorities took over many found that the former authorities had run down the general financial reserves, sometimes leaving nothing. At the same time often repairs and maintenance had been cut to release money for new vote winning schemes and popularity for some local politicians.

In particular buildings and road maintenance reserves had gone, again to all sorts of projects often designed on a have it now pay later basis.  Promises had been made to many staff and salary and pension rights ramped up before vesting day. The accounts were faked or forgotten or lost.

One feature was that before reorganisation there had been serious imbalances in rating values from one area to another and in types of building. When this was rationalised a lot who had enjoyed cheap rates were being hit. What was worse was that the high inflation of the period meant that everyone paid more in cash, despite some gaining in real terms, but they did not see it that way.

Edward Heath, the then Conservative Prime Minister made the mistake of trying to take on the miner’s in the middle of it and then calling a snap election early in 1974. He lost and Labour under Harold Wilson took control, conveniently blaming the Conservatives for the mess that was revealed in local government.

On 15 March 1974, John Poulson, architect extraordinary was jailed for fraud and corruption. He was active in a number of the old local authorities with the paradox being that a high proportion of them were Labour held mining communities. Had Heath waited it might have been different, but as Poulson buttered up a few Conservative ministers perhaps not.

Reginald Maudling, Conservative Chancellor of the Exchequer, who left The Treasury in a mess was associated with him.  His wife wanted to make East Grinstead the ballet centre of the world. It was trying to help out this expensive project that may have been the straw that broke the back of Poulson’s companies.

As I remarked at the time “It was all tutu expensive”. But nobody laughed, but it was in a meeting attended by Labour councillors former friends of Poulson. That some had been given fun times in London with ladies for hire was giving them cause for concern, especially if the wives found out.

Harold Wilson and Jeremy Thorpe, an Old Etonian and the then Liberal leader did a deal in 1974 and Labour took power. Look up Jeremy in Wikipedia for another grim tale. Looking back I wonder now whether Harold Wilson had already begun his decline into dementia by 1974 and came to realise it in 1976 when he resigned.

Then as now there were many changes under way which we neither recognised nor understood. Even the few that did realise that some things were changing irrevocably misjudged the scale and potential impact.

North Sea Oil was on its way, sea transport by container was transforming trade, major companies, such as Rolls Royce had gone to the wall. The railways were facing the loss of most of the freight traffic.

Cheaper holidays were transforming travel and tourism. The old basic industries of the economy were becoming neither basic nor economic and the subsidies handed out were not working.

Also, we had been led into the European Economic Community on false promises and a pack of lies. To do this we ditched the Commonwealth and imagined that Europe could replace the faster developing markets of the rest of the world.