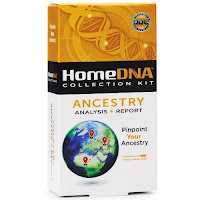 When you helped a few friends do that wages security van job back in the 90's you were unhappy that they coshed the carriers and did a lot of damage, but it did get you the car of your dreams.

You forgot to wear your gloves, but your fingerprints etc. were not on file and the couple of things you left behind would not be traced. So you were in the clear and the police would never find you and your mates would never rat on you.

But the police, mindful of the physical force used as well as other things kept the items in a box. Time and science have moved on. The things that were incidental had parts which have yielded your DNA but then the police could not trace this.

But the game is up according to Science Daily, in that the near cousin who is a family history and ancestry fan had her DNA done hoping to prove wonders way back in time among her family.

The trouble is that while she may not have Queen Victoria in the family  she has proved that the DNA you left behind was good enough to lead the coppers to your door.

Time for family historians may be an ever rolling stream, but you will soon be doing time for something you thought was forgotten.