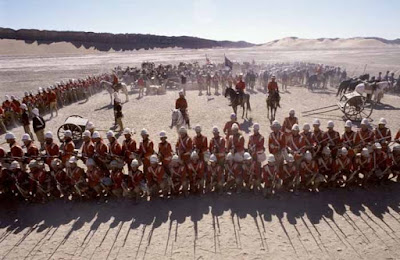 With the number of channels for choice there are many films now available to see on TV. But we do not want to watch many. It is us or them? What about fifty years ago when we did watch films quite often? One answer to that was that TV was so limited then that film going was usual.

Looking at the net for the UK films of 1968, the half century, perhaps there are a good many films that we did see. There were some recalled. There was "Where Eagles Dare" see the opening minutes. One was "The Lion In Winter" presented as historical but in effect hokum fiction albeit well done with major actors in the cast. There was "Oliver" picking a pocket or two and many others that have lasted the years.

One was "Carry On Up The Khyber" where the "Carry On" team went into colour in one of their lurches into history, but not as we know it. The film is about the brave kilted 3rd Foot & Mouth Regiment faced with a the rebellious Khasi of Khalabar who has learned from the Warlord Bungdit Din that they are not to be feared as they wear underpants.

In truth it is only a Private Widdle that does because of a personal problem and in breach of regimental orders. After a good deal of confusing coming and going the Brit's are victorious by means of raising their kilts in the face of the enemy. However, the film was given the date of 1895 as its setting, which raised the eyebrow.

What exactly was going on in that period in the sub continent in the way of military actions? On checking it out, might the film makers have been aware that this was the period of a notable campaign? It was certainly up the Khyber and in the district of Malakand. My first thought was for Auckland Colvin (Wikipedia), sometime Treasurer of India and Governor of the North West Provinces.

But he retired in 1893 moving to Framlingham in Suffolk, perhaps seeking more excitement. In 1897 however, there was conflict in Malakand and a major siege of British Indian forces by the locals. Among the commanders of the British forces was Bindon Blood (Wikipedia), the son-in-law of Colvin, and he won a famous victory.

So much so, that in 1898 an up and coming soldier, writer, and journalist wrote a book about it dedicated to Blood; he was Winston Churchill. The mixture is a rich one and a striking example of Imperial Britain in action in that period. It is a history now mostly lost and that period being now one we are told to ignore and forget because it was an imperialism of an elite. Parliament then was elected only by a minority of male voters and the House of Lords supreme.

We are left to imagine an India of diverse peoples and faiths, all happy in that state and being nice to each other who came under the heel of British rulers and war makers. That the Raj was in fact a British attempt to curtail or prevent incessant local war making and raiding by the rulers of these people, on trading and economic grounds, which had defeated previous imperial rulers down the millennia is not admitted.

But the British did leave behind large organised armies to the new states in the sub continent who despite recurring conflicts have kept some of control over it. These days, however, the more determined elements among the diverse peoples have other places to go to if they wish to carry on fighting.

But alas, in Britain, there are no Bindon Blood's to be found.