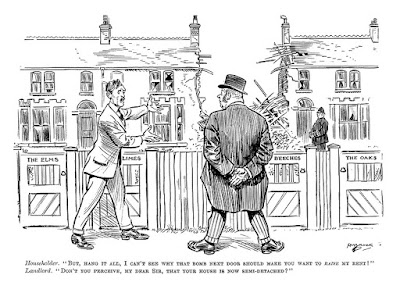 Down the decades, indeed centuries, the word "Landlord" has always been one that produces an adverse reaction. There are many uses of land with many wanting to use it and so those who are the legal owners become landlords. In the 18th Century I suspect my tenant farmers could have been at odds with the gentry class.

Rather later, I recall my parents, who liked to welcome and enjoy the company of friends and neighbours, did not like it when the landlord called, especially when he persisted shouting "I know you are there" while we hid in the attic. As a student, I needed landlords, but many of them made it clear that they did not need me.

There was a time when a high proportion of the population rented, none of that lets make everyone a property owner business then. So the politics of the period meant a party that would "control" rents or promised only to allow "fair" rents etc. meant all the parties bidding for the mass votes of those for whom renting was the only way to have living space.

Having lurched about the property markets to promote mass ownership and that becoming rapidly unstuck and having consigned a good many to what is effectively debt slavery we are back to the business of renting being necessary for many. Bash the landlords is back on the agenda.

This is now complicated by the fact that in the longer past the tension was between Brit's of various kinds. In the 21st Century we have many and various sections with their distinctive ways and means inherited from the places of their origins. One feature is that migrants with money often chose property, those without money, especially refugees, then become almost a servile class.

This means that while landlords are heading back to the top of the bash the rich lists the politics means that potentially there are massive subsidies needed as welfare or other benefits for the rapidly increasing numbers who need and are beholden to the landowners and renters.

None of our parties has any sensible or rational answers to any of this all variously claiming to be promoting property building, helping business, guaranteeing welfare and keeping a lid on rents at the same time when this is clearly impossible.

In the meantime those at the wrong end of are queuing to buy lottery tickets in the faint hope of buying their way out.