Putting Up And Taking Down 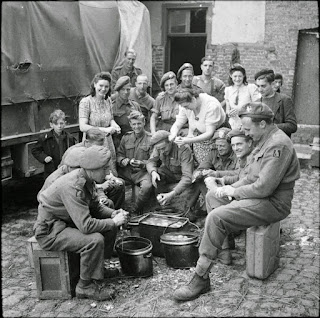 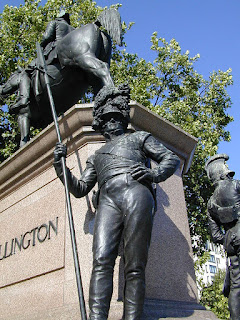 Another day, another statue, this one the Millicent Fawcett suffragette. Whether these memorials of the past are there to inspire us or to warn us is an interesting question. Ideas and beliefs change down the generations.

Those we thought great at one time are not later. Beware the heroes of war who saved us from Napoleon but believed in things we do not. Perhaps we might have a campaign to have the six wives of King Henry VIII as a group to remind us of what things used to be.

Martin Kettle in the Guardian newspaper of 26 April, today, says there are too many statues and we could do without many of them and certainly stop putting them up. He may be right. There are many town centres where you wonder who and what that person had to do with the town.

The Duke of Wellington has statues in London, never mind a magnificent tomb. The one by Hyde Park Corner is interesting in that there are four soldiers, perhaps one each for Scotland, Ireland, Wales and England, see above.

One I know, of a fusilier of the 23rd Regiment of Foot, is for Wales, the others I do not. Interesting though in that a great grandfather of the singer Kathleen Ferrier, Daniel Murray, was in the 23rd at Waterloo. But he was Scots Irish from Co. Down. Kathleen was the ultimate Lancashire lass of her time.

Statues are becoming common, if that is the right word, at football stadia to baffle the fans of the future and provide a target for visiting supporters to go in for a bit of publicity seeking vandalism.

But moving on from the post of a couple of days ago calling for compensation for conscripts to the British Army perhaps the ordinary squaddie deserves one.

A man who as well as training, fighting and doing parade ground stuff spent a large chunk of his not so spare time peeling potatoes. That is a tribute to all the spud bashers as we were known.

Quite where the best place for it to be is a puzzle. One might be the Embankment in London near the Savoy Hotel where some of the War Office bosses spent much the war. I would prefer Waterloo Bridge which so many crossed on their way abroad in the 40's.

The picture above which might provide a model is dated 3rd September 1944 and in northern France where the British troops were advancing against a determined enemy.

The logo on the arm is a Jerboa, a Desert Rat, and tells us that these men were in the 7th Armoured Division, which went from El Alamein to Berlin via Italy and Normandy.

That fact that I wore the same logo a few years later is purely a coincidence.