Putting Marx In His Place 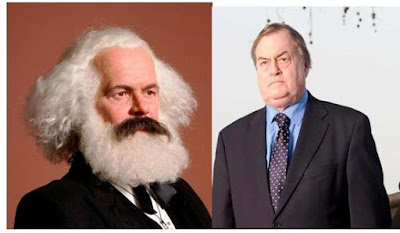 In the next few days and after there is going to be a lot said about the two hundred year anniversary of the birth of Karl Marx in Trier in The Rhineland, then under Prussian rule, but various before with the coming and going of princes and armies over the centuries. It has an ancient cathedral with some prize relics of the saints.

We too have our prize relics of the nearer past, one of which is John Prescott, not long ago Deputy of the Labour Party, called Two Jags because of his personal support for the motor industry who gave much delight to us all via the cartoonists and comedians.

Seeing this picture of him, and seeing one of Karl Marx makes me wonder, who is who, I do not recall John having much hair and whiskers but you never know. John and his ilk are now men of the past in the Labour Party and with their going we are now back to Marx with chips as the Lefties have grabbed power.

There is a great deal of academic literature on the subject of Marx and the intellectual influences bearing on his work. He calls himself a professor and author and was one of those who could just write and write and keep going long after the reader had begun to flag. It is not easy nor was it meant to be. He was trying to explain what he thought the world was and how it worked.

Which raises the question of who did he talk to in the ordinary course of his life? Not the eminent writers or academics of his time but the other forgotten people. The ones he saw, met and was with on a day to day basis and could not avoid. In short the neighbours, who were they? What were they? What may we read between the lines of all that print he turned out?

This blog has already dealt with Morgan Kavanagh and the time Marx was in Dean Street, Soho to suggest that ancient myth and language may have been involved. There were other possible influences there at the time. I refer, of course, to the long standing Huguenot community and their Protestant and commercial interests.

In 1861 he had moved house, as people did then, at least it is unlikely he would be faced with a sign saying "No Prussians". The Germans were seen as our cousins and friends. Quite unlike the French. He has a Maclachlan, an auctioneer, was today's "Private Eye" cartoonist one of these? Did Marx ever return from a book sale with a set of complete works of the great sermon writers, wondering how that had happened?

Then there is Bailey, a sculptor, who did not do one of Marx, probably because he would never see the money for it. And there was Langer, the builder. "Got a roof leak squire? I know just the man, mind you it will cost a few bob". Between these men he would have experienced capitalism red in tooth and claw.

By 1871 Marx had moved up market a degree to the other side of Regent's Park. He is in the first house on the street and next to a John Ford, a "Fancy Worker". There is a Clinton, a Clerk in the War Office, a Batchelour, a retired Treasury Clerk and a Preece in the high tech of the time Telegraph Service, distinctly all of the petty bourgeoisie.

Then in 1881, on the same street, there are the immediate neighbours. On one side Edwin Willis, of the leading organ builders. They had a branch in Liverpool which Edwin took care of at a time when the different faiths were trying to out build each other.

If our present Liverpool Lefties want to get close to Marx, one of their local Parish Churches may well have a Willis organ for them to sing along to. The London Lefties have a rich choice of churches but The Royal Albert Hall with its Willis organ for The Last Night Of The Proms might be worth a visit.

On the other side of the Marx house is Henry Goddard and his wife, Kate. He is a doorman at the House of Lords at a time when many of them thought that the House of Commons was no longer reliable and the Lords should reassert their authority. Previously he was a senior messenger in a City Bank, who put the capital into capitalism.

Before that Goddard had served in the Army between 1844 and 1863 and discharged as a Sergeant on a Chelsea Out Pension and he had been in Bengal with the Royal Artillery. Which means he was there when it went bad in the mid 1850's, Mutiny or Revolt as you prefer and witnessed the end of the East India Company.

Did Marx ever spend a warm evening or two in a garden with the neighbours chatting about this and that and drawing on their invaluable experience? Who know what could have happened?

When Goddard nipped down to Chelsea now and again to see about his pension he might have encountered Naish Hannay, the Waterloo veteran who was in Bath at the same time as the Austen family as a youngster.

What might have happened if he had put Karl Marx onto reading Jane Austen?