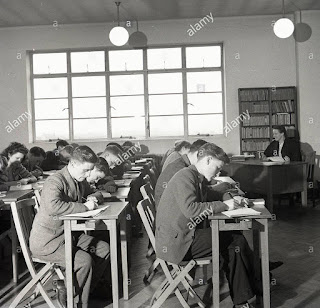 It may seem odd to compare my wandering around the net to the business of universities granting more first class degrees than in the past, but I wonder. I started by looking at the TV schedules to find a reason to skip the sport for a change. One section was the films.

There was the usual collection of films ancient and modern, many of which are on offer for the umpteenth time and which I can almost recite by heart. But one turned up that I recalled from very long ago and wondered if it was an option.

Checking it out, I realised that while it was a "good" film of its period in terms of the drama, acting skills and plot etc. it was not one for me being very much of the past. But the name of the Director caught the eye.

Something went ping back in the memory bank, sixty years ago I had been sharing a flat with some others and one of them had that name, only a different first name. It was unusual and distinctive. A couple of minutes later I had read his obituaries, he had done very well and died a distinguished academic.

Five minutes later I had his relationship to the film director. It explained the memory. He had started his Ph.D studies and had access to some interesting stuff, one item of which he brought back to the flat in a taxi. It was a large black box.

Wire recording was new and very expensive and we had a couple of days to enjoy the march of science and play with it. We omitted to clear the wires with the consequence that when demonstrated later to a senior academic audience they were surprised at the quality of our singing and even more so by the songs.

This point is that I put this bit of history together in a few minutes. The question is how long might it have take to do all that in decades past. There is a lot of history etc. that I can do now in vastly shorter times than what was required.

In short I have become more efficient. As our students of today are almost all net experienced and capable of extensive searching, then they can be learning and understanding a lot more in far less time than the old academic things of lectures, classes, libraries and wading through print to find what you want.

If, on top of that that those providing courses are making it much clearer as to what they want studied, what the parameters are and have refined the content and structure to create a clear basis for the student work, this will have consequences.

One is that a lot more students will be turning in much better work and be more capable of coping with the nature of modern examinations. Had my lot had the advantages of those of today in the running and working of courses of atudy, how many fewer might have failed and how many more would be achieving higher standards?

I realise that suggesting that higher education could now be more efficient than it was may not be popular with many.

So how long does it take you to find out what is on TV these days?