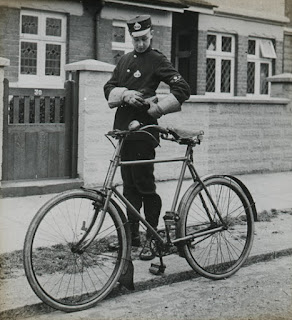 During World War Two at school and sitting alongside a friend, the Head came in to call him to her office. I never saw him again. It was June 1944; his father had been killed in action in France and his mother moved away. In our streets and those around a number of families had men in France.

Who they did not want to knock on their front doors were the Post Office Telegraph Boys, see above, with bad news of one of their men. Also, they did not want the postman to deliver with a returned letter they had sent to someone close. If they were in the armed forces it could mean they had been lost.

We were a "nation at war" as Churchill put it. During one summer holiday I was sent to my grandfather who grew much of his own food and lived in a rural area with clean air and a lot more to offer.

But there was still the war, he had served from 1914 to 1919, a rare survivor of the first intakes and had been at The Somme, Ypres and The Hindenburg Line.

The bad time was when we had a returned letter and learned a few days later of a close and loved uncle who had been lost when his ship was sunk escorting troops to France.

As one of the last generation to have lived then and who later had served in the Army with men who had been in the Normandy Landings too much of what I see on screen or in the media seems to be about a different world from the one I knew.

Perhaps it is too different for the 21st Century to understand.