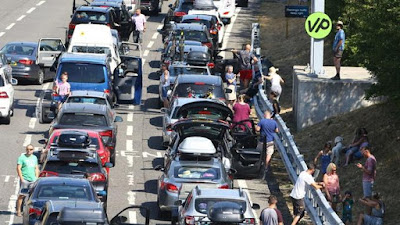 It is now June and I am warm, very warm and need to take care having seen too many in the past who did not under hot conditions and not knowing that their DNA's meant they should try to stay cool. Also, keeping out of the sun, those of us who go bright red after only a short exposure need to know it is not just the skin that is off but other bodily functions.

What does whack the system is the high levels of humidity that can be a trouble. But, if it means that careful is being idle then it is not so bad if you can manage it. But you need to have more liquids and that can where the trouble starts. We keep it to water, tea, some coffee and avoid the high sugar, sweetener and alcohols preferred by so many.

But all those are the basic ones which so many go to and in quantity affect them in various ways. It is ironic that in the past so much of the water available was not fit to drink, in fact dangerous, so it was safer and more sensible to drink the others. Many of our ancestors on the ale etc. could have spent a long hot summer bombed out their minds.

It might explain all those riots and revolutions that historians tell us arose from this or that political and economic situation. Things that people put us with when sober and cool they did not when they were hot, bothered and in situations where the temper was put challenged or their dislikes of others, or other social groups erupted into violence and law breaking.

At the moment, it looks as though those in London will be hotter  and more temperamental than others. Given a General Election could happen, incidentally a collapse of the European system and beyond that space of time are football supporters have no match to go and The Left more angry than usual anything can happen.

We like to put the TV off, because that adds heat, and listen to some music on our new expensive digital radio, every note clear, no  interference and have a cold drink, very cold.

Or perhaps I could organise a demonstration.