The Wisdom Of Lenin 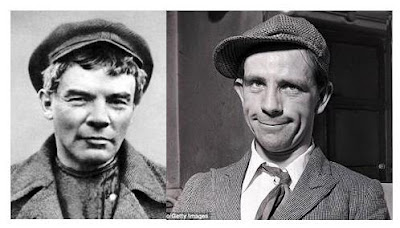 In the history of the 20th Century, among Russia's major figures are Stalin and Lenin who both visited London in the first decade of the 20th Century and met there. This has attracted interest, but as they were both mobile revolutionaries keeping clear of the forces of law and order the archive material is scant.

There is information on these visits and a debate about their purpose and what happened. For example in the case of Lenin, Sidney and Beatrice Webb, founders of the LSE, London School of Economics in 1895, were admirers of his theorising based on his studies of Karl Marx. They were also central to what became The Labour Party later.

One thought is that as the lectures were open whether either Lenin or Stalin turned up to mix with the students of the time. Also, who else might be around. Picking up on one aspect of this in 1907 Lenin is said to have visited Stalin at 77 Jubilee Street in Whitechapel. The street was largely working class typical for the period.

In 1901 the Census has this address as yet to be built, but in 1911 it has five families, probably Jewish fleeing the pogroms of Tsar Nicholas II. Of the 26 names the parents were of Russian origin but the children, with one exception were born in London. In the general area there were other families of this background.

In the early 1900's Lenin was at several addresses including Tavistock Place. It is intriguing that these were upmarket if you look at who else was there. For example, in 1901 there is Alexandre Genee, Ballet Master at Covent Garden, a leading figure in European ballet at the time.

There is also an Italian Professor of the Violin, a Covent Garden tenor etc. If Lenin was at Covent Garden in a standing place at the back of the stalls then I have stood where Lenin stood. If he could run to a seat in the gallery then it may well be sat, especially if he was one of the then front row gang.

Come 1917 when it all happened in Russia, one of the first nationalisations was the theatres and concert halls and during the eras of Lenin and Stalin the state had a firm grip as to what went on there. Culture you got and at low prices. But so much of left wing politics is theatrical, the congresses, conferences, demonstrations, mass meetings, the film archives are full of them with speakers waving their arms about urging The People forward to revolution.

Among the neighbours at his addresses one surname that appears is familiar. It is a Wisdom whose 1915 born son was Norman Wisdom, the famous mid 20th Century comedian of film whose work is highly regarded in Albania.

Could I interest the LSE in a thesis about Lenin being the cheeky cheerful cockney chappie of political philosophy?