San Fairy Ann Means No Can Do 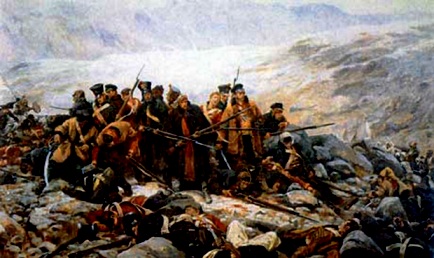 It is said that the Prime Minister has met with the senior Generals in the Army to discuss how we may contribute positively to a peacekeeping (some hope) mission to .  The answer was another question. “With what?”

In short The Great Game is now finished and the final whistle has been blown.  The British Army can barely meet its existing obligations and is unable, and maybe many of the squaddies unwilling, to sustain the persistent levels of engagement that have been asked of them in recent years.

It was the Labour Government, whose remnants are today talking about a March on Downing Street after the Corby Bye Election, who got us into the current mess, not only committing us to , but taking on as well as other efforts here and there.

In West Africa, events in are taking a turn with the government there may not be able to control the revolt in the North and there is talk of assistance from the Western Powers.  This could be as big, nasty and as long as .

Part of the problem is the innocence of making wars and the almost total ignorance of recent governments about the realities of deploying troops in hostile or very sensitive expeditions.  If the Army appears to number 100,000 then they think it is simply a matter of sending all 100,000 off to engage in continuing action.

A lot of the Army is support and transport services.  Again, there has been the blithe assumption that somehow this can be “out sourced” or done by civilians.  Or that if enough civilians can be persuaded to be in “reserve”, this will magically enable savings to be made and numbers to be cut without difficulties when it comes to the hard bit.

Back in the 1960’s, Harold Wilson when Labour Prime Minister, proclaimed that Britain was retreating from East of Suez because it could no longer either afford or be able to take on military engagements on the scale of the past.  Then the Army was a lot larger and the men younger than the Army of today.

One of the features of Armies who are engaged in frequent combat is the rate of turnover of the troops.  Take the 71st Highlanders during the Napoleonic Wars (who included many Lowlanders, a large contingent from Surrey and a lot of Irish), it was said that of those who stood in the Line at Waterloo only 13 remained from when they had landed in Portugal under Wellington.

Having gone through the muster rolls for the whole of that period for both the 1st and the short lived 2nd Battalions, it is possible that the real figure may not be far wrong.

Nearer to the present, when the 7th Armoured Division paraded in in July 1945, a minority had been with them since in 1942.  That was three years, now how long have we been in and how long were we in ?

To have 10,000 troops active in the field you need a lot more on the ground wherever it is, because they can be in action for only limited periods at a time and those periods will be less, sometimes a lot less depending on the conditions, than the overall period when they are being rested, remanned and resupplied.

Then you need far more in support for a whole raft of good reasons of supply, provision and care.  At one time it was reckoned that one man in action needed another seven on overall strength for all the various reasons.

So if the Prime Minister is thinking that British troops can be deployed here or there wherever there are calls for intervention and it comes to a total of going on 30,000 at any time who are effectively in action, then he needs an Army of 200,000.

Also, this Army has to have reliable supplies of all the equipment, backup, communications and the rest to function effectively.  The kind of management speak bodging, fiddling and doing political and commercial deals we have become used to will not work either.

The picture above is the Last Stand of the 44th at Gundamuck in on the Retreat from in 1842, one of the great British military disasters when Elphinstone’s Army was massacred by the locals.

But there are other campaigns in the Regiments history.  It was the 44th who took the French Eagle at in July 1812 and routed the Yankees at Battle of Bladensburg before torching in 1814.

What a great pity that the Prime Minister did not celebrate the 200th Anniversary of The Battle of Salamanca last July, he might have learned something.
Posted by Demetrius at 17:45