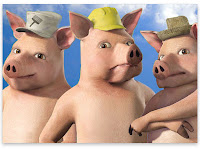 Last week Global Witness (dot org) published a major report "Undue Diligence" on How Banks Do Business With Corrupt Regimes. It deals with several well known banks and the manner in which they handle monies taken from corrupt regimes, largely the rulers and their families, and the associated elites. As many of these countries have large proportions of their populations living in dire poverty, with rampant disease, and few if any modern services away from certain urban centres, it makes grim reading.

What is more worrying is the potential implications of this report. These are just the few where evidence has emerged in publishable form. What else is going on in these banks, and the many associated banks and agencies? Moreover, looking at the top echelon of executives and directors, many are close to our own government, and embedded in its financial operations.

As the drugs trade commands so much money, and is now so interconnected with other non-legal and legal economic activities, just how close are some of these people to each other? It is curious that whilst I face obstacles in moving money from one account to another in the same bank, along the road in the local gaol, the place is awash with drugs freely bought and supplied.

It is a strange world where people, including prison inmates, can access illegal drugs much more easily than I can get my electricity meter read, and where the money for these can be transmitted far more effectively than I can extract a reliable billing from my utilities.