The Mercantile System - Back To The Future 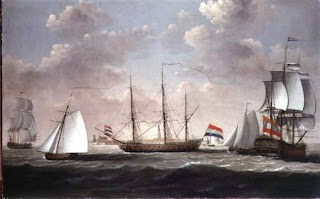 In the turmoil of the 1970's a few people were arguing for a "Fortress Britain", outside the EU, paying its own way, and accepting the level of austerity and restrictions that might be needed. As most of those were well over to the Left, with some a little too close to the Soviets, this was not a thesis that gained much support. Moreover, we all wanted our goodies, and the price of houses were going up. The notion of "Free Trade" was still thought to be basic to progress. Of course, it had never been entirely free, for the Brit's it had largely meant embroilment in an overstretched Empire to keep business going and the City happy. Also, these were happy days when we thought resources were infinite, money was infinite, and happiness meant cranking up the GDP as fast as we could. Climate? Food supply shortages? Fuel supply exhaustion? Degradation of the environment? All hocus pocus.
But there was a time when men believed that money was finite, riches were finite, and that food supply was finite. There had been more than enough famines and shortages in Europe in the memories of many people to assume that world was a generous place. It wasn't, it was mean, and a nation needed to protect what it had, protect its farmers and food, and command its own trade in its own way and in its own shipping. So the essence of economics was the Mercantile System whereby the State managed and controlled the external trade to ensure it was able to access the bullion, always the bullion, and the other goods it needed to survive.
Britain built its Navy on the back of the merchants, the Navy built its Empire and possessions, and they provided first the bullion, and then the goods that London wanted. It was the bullion that then paid for the expansion of British trade, together with the growth of associated credit and banking systems.
Having done that, and established a world lead, then it seemed that with the world in its grasp, Free Trade would be a good thing. But was it? American watchmakers, German chemists, French motor engineers, a variety of bulk food producing nations, all demonstrated even in the late 19th Century that there was a price to pay for British industry and agriculture. With with new sources of gold, new products, growing populations, and apparently unlimited land to be found so we went on.
We finished up in the EU, an organisation alleged to be free trading, but in fact a closed trade area in many respects, so we went for broke in financial services to pay for all the goodies. And we went broke, so now where do we go? Telling the USA to free up their trade when they face an EU that is anything but free, a China with its own ideas, an India ditto, a Russia ditto, and others scrambling to protect themselves, what is America going to do?
Back in Britain, where we lately sold off much of our gold at the bottom of the market, perhaps it is time to start building our own ships again.
Posted by Demetrius at 10:29