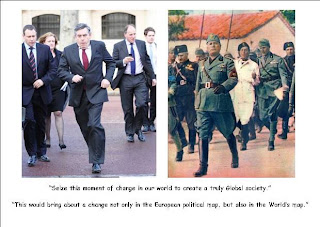 There are three broad streams of thought to the thinking of the G20 powers. One is the Anglo-Saxon model, which derives neither from the Angles nor the Saxons but from the diverse hotch potch operating from London and New York of easy money and fancy financing. This can be called Enronomics after the famous Enron, the very model of a modern major company, that sadly hit the rocks before the Age of Bail Out dawned. It is not so much a policy of unintended consequences, as to hell with consequences if we get out with our money first, and then shut the door on the taxpayers. This applies to the UK and the USA.

The other is the German (oops Euro!) model, which actually owes more to the ancient tribal lands of the Angles and the Saxons and their habits of careful frugality and ordered community. This group demands care and careful regulation, and avoiding high risks in the handling of money. It is dull, slow, and demands discipline and does have its downsides.

The third is the Eastern Group, and these are likely to be running good old fashioned Mercantilist Systems. This may entail colonising recalcitrant entities, or at least taking over key sectors of their economies. In the UK we have sold off so much of our economic base, that there is not much left to sell, so if we fall prey to this, we do not have much more to lose.

None of this will emerge in the communiques, or in the media (they do not understand it). We will get some headline items. Some tax havens, in due course, and after careful analysis and reporting, will allow some information to be made available. This will give the High Net Worth Income community ample time to rearrange their affairs with those tax havens who stay outside the pale, new ones, or those Mercantilist powers who offer them a warm welcome.

In the meantime all my living costs are going up sharply, my income is going down, life is becoming more complicated, and I could be arrested if my refuse bin is the wrong colour. Just like nearly everyone else, with the exception of a lucky few...........well we know who they are.
Posted by Demetrius at 12:22