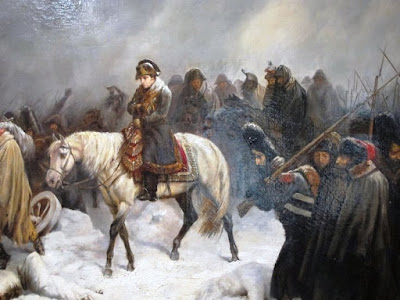 Another difficult week, why is everything so complicated?  The way that time evaporates when you first address what may have been once a simple thing is alarming, especially when time is something to be treasured. It all seems to be a developing shambles.

The Greeks had a myth for it with Sisyphus (Wikipedia) which seems to be what the future looks like for them. It means to have an endless uphill struggle with no respite.

What is not recognised because the idea is so unpopular is that having gone uphill for so long the West is heading downhill with gathering pace. The Retreat From Abundance is under way compounded by the increasing gap between those that have and those that have not.

The question is what kind of retreat will it be? Is it a retreat to The Lines Of Torres Vedras? Is it a Retreat From Mons? Or is it a Retreat From Moscow. In 1812 Napoleon. an early Euro federalist, marched his French Army of half a million men against Russia, quite why I have never really understood.

The French often relied for supplies of food and forage etc. by living off the land they occupied. This may have seemed economic but unluckily left large numbers of angry locals behind them. The Russians gave ground and then more ground and even left Moscow to the French.

The consequence was that when winter came the French were not prepared and a scorched earth policy had left them badly short of supplies. The Army that had invaded Russia was reduced to a few straggling thousands barely alive.

The Retreat From Mons was another matter in August and September 1914. After encountering the full weight of a well equipped and larger German Army the British and French had to retreat to a more tenable defensive position and hope to hold the line and prevent either the loss of Paris or a breakthrough in the north.

It was touch and go and for the troops on the ground a desperate business compounded by all the difficulties of communication and decision. “The biggest shambles since Mons” was a common way of describing foul ups and unholy messes for a long time. But the British and French just about held on and managed to stop the German advance.

Much less known these days is the 1810 retreat to the Lines Of Torres Vedras in Portugal. Wellington, having won at Talavera realised that he did not have enough troops or support to hold the French and retreated to prepared positions to sit out the winter, regroup and build up strength and supplies.

The French were left in territory to which a scorched earth policy had been applied and needing for forage widely across country to stay alive again running into trouble with the local population.

When Wellington moved out, his command of ground and ability to out march the French and critically the supply chain he created meant he could reclaim the Peninsula from the French.

So which are we in for in the coming year or two?