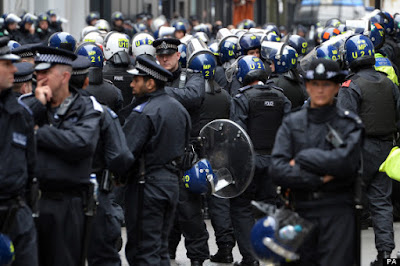 It is being said that the rise in crime, especially those of violence is entirely due to the reductions in numbers of police officers in the various constabularies. 'Ello, 'ello, 'ello, what's all this then? Come along to the station with me and explain.

May I confess that I have missed the boat there. Not realising that there may have been a reduction in the number of squealing police cars belting up the road to the motorway or if not then that is at the expense of feet on the ground in the streets.

The trouble is that here the scope for robbing and attacking shopkeepers is much reduced because so many of them have closed. One would have to go to centres which therefore attracts all those with inclinations to crime. Add to that they will go for the shops which do more business in cash that most.

Another issue is that of the gangs, who they are and where they came from. This is nothing new, it can be seen down the centuries. The famed London Mob of the 18th Century was largely made up of contingents of gangs who at times appeared as one.

With the age of film and TV one of the staples of production have been crime films in which often gangs have been at the centre. Al Capone eat your heart out, or somebody else's. The effect of these has been to glorify this activity to an extent with its appeal to rebellious youth as well as men on the make.

Again down the ages a feature of the composition of gangs has been rival groups of young men. Those who promote migration in principle often do not look at the facts of the figures. A good many migrants, past and present, have a high proportion of young men looking for work and money, and some money without the tiresome work.

Where one culture does not have freedoms of certain kinds, for example the women folk and another does, given the natural propensities of young males with the fare in their pocket, then off they go to places where they hope or think their wildest dreams will be fulfilled. In the 19th Century there were things you could do in Manchester or Manhattan that you could not do in County Mayo.

In the 21st Century, times and peoples have moved on so in our urban areas in the UK the young men are from different places but nowadays we are supposed to welcome all according to the new norms of political correctness. The trouble is that those at the wrong end of it want to know where the police are and what are they for?

In the last few days the failed robbery and the death of the thief at the hands of a very elderly man have produced some interesting questions. Mine is that there were two people being robbed and why have we forgotten the lady. She was also elderly and very frail and obviously her life at serious risk.

So the man is arrested for coming to the defence of his wife and doing unto a robber what the robber was doing to her and him? It is likely he was not charged because I could not have imagined any jury finding him guilty.

But what if we were in a legal system where the judge was bound by the rules that the government had laid down? I wonder if we are not far away from a system where in a similar situation the elderly lady was put to death and her husband also and their estate handed over to the family of the robber?