Election Fever A Dose Of History 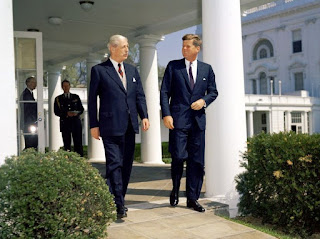 It will be several days or so before the next post as an Easter break is being taken. In the meantime the media are doing their "will she; won't she" routine as to whether the Prime Minister will call a General Election. We have been here before, in 1959 the downside of a long memory. Could a no hope unelected Prime Minister who ran a government in real trouble come back to win?

In January 1957 after the disastrous venture into , had resigned and Harold Macmillan took over. For the media and the general public it had been assumed that Rab Butler would be PM, but insiders and party placemen ensured that it was Macmillan as the “safe” option, and even he wondered if he might last only six weeks given the mess he had inherited.

Despite the turmoil, Macmillan hung on, and began to establish himself in the media as a bluff, cool headed expert man of the world, who knew his way around; a veteran of The Battle of the Somme with The Grenadier Guards and badly injured. He was quite unlike the busy, worrying modern technocrat determined to change everything that Hugh Gaitskell appeared to be.

Having seen them both at close quarters before gatherings that were knowledgeable and critical, my view was that Hugh was more honest than most in many ways but dogmatic and flawed in his simplicities. Harold was a neurotic shyster.

The economy turned down sharply after the post oil shock.  The nuclear protesters were gaining strength and others were anxious. Some progress had been made since 1945 to increase secondary education, but now it was demanded for all.

Race riots had occurred. Local elections were going Labour’s way, and the media was unsure and uncomfortable with a Tory  government with thirty five Old Etonians, unelected peers, and others who seemed to be appointed for money and not merit. There were suggestions of cronyism and too great a closeness of financial interests.

In the Autumn of 1957 there was a serious flu epidemic, Asian Flu, related to our modern swine flu, or so I am told. Then at the beginning of 1958 three key finance ministers resigned as a consequence of Macmillan’s plans to push money into the economy, which they believed could increase inflation.

Macmillan’s view was that a small annual dose of inflation could not do much harm.  Nor could tobacco smoking, which gave the Treasury a lot of its tax income, despite suggestions otherwise, which Macmillan stamped on good and hard, to the applause of his tobacco baron friends.

During 1958 and 1959 Macmillan flew about, devolving power to colonies, with a few economic strings attached, getting close to President Eisenhower and later President Kennedy and signing nuclear agreements committing the long term, for which he was called, satirically, “Supermac” by Vicky the cartoonist.

He was saving the world and restoring our Great Power status, at the same time as running down the conventional forces. There were problems with , and over in Europe there was a Treaty of Rome, creating a Common Market, which he assured us, would not have implications or consequences for the .

The media did not know what to make of it all, and it left Gaitskell and his team scratching for attention. The BBC gave us a relentless diet of Lord Boothby as an ikon of culture and custodian of national identity.

They did not mention his friends, the Kray brothers or any other inconvenient truths, nor the close encounters he had with Mrs. Macmillan. Not a hint of critical comment passed any of their lips. ITV, on the other hand, were anxious to convince us that the Esso sign meant happy leaded motoring, and that consumerism was good.

Macmillan’s government continued to spend their way out of trouble, rock and rolling their way, they said, to a rich future for us all, we would never have it so good. The miseries who looked at the figures and the way the world worked knew it could not and would not last.  But that did not matter.

Because in October 1959, against all the odds of barely a year before; Harold Macmillan romped home in the election, and then the real crisis of ’s future began.