A Voice Once Heard 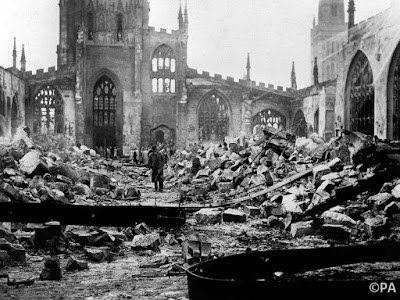 There are times when things come together which otherwise might have no connection to each other. Heather Harper has left us at the age of 88 having retired twenty five years ago and whose voice and reputation have slipped into history.

One of her major, if not the major, performances was the soprano lead in The War Requiem by Benjamin Britten given on 30 May 1962 at the Consecration of the new Cathedral of St. Michael in Coventry.

It had been built to replace the remains of the former medieval cathedral which had been destroyed during the German blitz on Coventry during World War 2 when this city along with others were targeted because of their extensive engineering and other industry essential to the war effort. There are few people around now with any memory of this, but I am one.

When Coventry was blitzed I was under the flight path of the German bomber squadrons, mercifully far enough up the road to avoid it. Apart one night when the German losses were such that they unloaded their bombs on us. My father, up on the roof of his factory on air raid duty was not pleased.

In the ordinary way of things during and after the war we were often in or around Coventry until the 1980's and knew about the bitter debate as to whether to rebuild the old Cathedral as far as possible. In the 1950's those who saw us in a new age won and a new modern architectural wonder was built.

But the money did not run to much wonder and the architects thought more about the visual effect of the structure as opposed to its religious significance, also seen as out of date. Now, half a century on for many it is a curious relic of a bygone 20th Century age. Also, the Britten Requiem was not well received except by those who understood its severity and his particular style of music, he did not write to order but to his ideals.

Today, Coventry City FC is broke, once in the Premier League, victim of hedge fund trading gone wrong, and might be lost. Coventry RFC once England's best rugby club has slipped down the tables. The town centre is now a grubby suburb of London, less than a hour down the railway line, its major industries etc. gone to The East, and many of the The East have come to Coventry.

We saw Heather perform a number of times and she never failed to put across the meaning, sense and beauty of the music she sang and loved which meant her audiences were taken with her into the understanding of them.