A Scrimmage In A Border Station 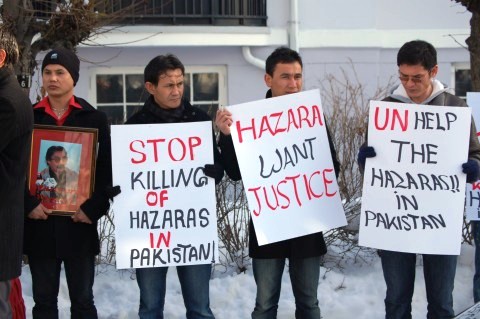 In 1947 when the British Raj in ended it was finally determined that in the sub continent the majority Muslim north would detach from the largely Hindu south.  A line was drawn hastily on the map according to what was assumed from existing statistics.  The and then north east would become and the south .

This political solution reached between the leaders of the major interests dealt with some issues but created others.  The immediate local populations in the areas of the borders were not consulted and in areas of complex population structure violence became common and there were heavy casualties amongst ordinary people.

The “Pax Britannica” turned into a bloodbath, two warring nations were created from one and mass migrations of groups occurred where those who did not want to find themselves members of an oppressed religious or racial minority got out fast.

There was an unlucky consequence of the infliction of modern ideas of nationalism on a vast area comprised of many population groups, religious beliefs and differing languages.  It was to later generations in the West the notion that Pakistani’s were more or less all the same and most of the Indian’s.  Kipling, along with the had gone out of fashion.

This is not the case.  The sub continent is a vast area of many differences, so it would be impossible in a short item to begin to cover this, but one group could serve as an example of how complicated things are in reality.

The Hazara came up on my radar when looking around Male Y Chromosomes in the field of genetics.  In today;, located in the north adjacent to with a long history of interchange, they are both a religious minority and a minority population group who feel that they are being targeted for violence and discriminated against.

The word “Hazara” is said to mean The Thousand.  The founding legend of this people is that they are the descendants of a force left behind after the great Mongol King, Genghis Khan, swept across so many territories.  It is said that this accounts for their typical Mongol features.

When recent geneticists looked they discovered what the media and others called The Genghis Khan gene in that a high proportion of the males shared their Y Chromosome with the Mongols and traceable back to the period of Mongol power.

But there are other minor genetic groups of males amongst the Hazara men.  One group has a Y Chromosome arising from a mutation that occurred in the Balkans around 25,000 years ago.  Quite when and where their ancestors came from is an interesting question.

One obvious one is perhaps some swept up by the Mongols in the West and carried back.  Another is from the Old Silk Road between and the East.  Then there are the descendants from the Macedonians that Alexander the Great left behind to rule the cities he left behind him.  But there are others who have come and gone.

The Hazara are substantially Shia Muslim, which puts them in a religious minority in Pakistan as well but at the same time allies them to other Shia in other places.  This may account for some of the problems.

A couple of links will give an introduction to the subject.

This one is particularly interesting:

Wikipedia has basic information on the Hazara.  You will see or hear little or nothing in our main media about what is happening here or why.  This is largely because it goes against the grain of conventional thinking and is difficult to explain in a one or two minute slot between the other news.  Try fitting this question into to the routine media stories about the region.

Inevitably, between what is going on in , the internal pressures in the region and the overall hostility of the Pakistani regime to this minority a number of them have left to go to places which accept refugees.  The picture above was taken in .

When our political leaders preach about “stability” or bringing peace to disturbed place and send troops here and there they may not be creating “peace”.  They may simply be creating the pre-conditions for more extensive violence and breakdowns of governments.

Try Rudyard Kipling, “Arithmetic On The Frontier”, it might help.