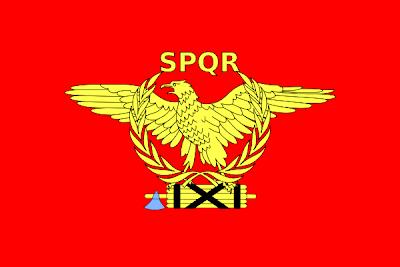 A document unearthed recently by archaeologists from a building site near Kings Cross, evidently a place of ritual, has been translated. It is a public declaration by an official called “Custodian” relating to the year beginning and is dated to early 410 AD in modern form.

“ After due examination of the entrails of several beasts and offerings to the great and good amongst our gods and officials we can confidently state that there is to be a new beginning to our future, quite unlike the beginnings of the past, which will lead to a recovery in our affairs to reinstate what we have lost forever and no longer need.

The reductions in our defence budget and planned future deployment of more of our legionaries to the furthest corners of the Empire to secure our borders against the Persians, Goths, Vandals, Dacians and others will enable us to concentrate our efforts on our own internal security. This will be achieved by the empowerment of local officials in liaison with groups of the auxiliary forces in consultation with local interests. We are sure that the high level of mutual interests will lead to the political stabilisation of the Atlantic Isles for another four hundred years at least.

This will be enabled by the wise foresight of the control of the mints. The progressive reduction of the silver content of the coinage will continue to help increase the amount of money to further trade and critically the great work being undertaken by the money changers and lenders. It is to them and their central role in the getting and spending of money and trade that we look to provide a continuing rise in our prosperity. The reduction in the amount of gold we hold to assist the Empire in paying dues to the peacemakers on our eastern borders has been of great benefit and the continuing reduction will free us from concerns from this quarter.

Our policy of increasing the amount of protective fortification of the dwellings of our patrician class and local tribal leaders together with the concentration of trading in designated walled centres has helped our internal security and protected our vital interests. The continuing troubles amongst the plebeians and the other classes dependent on free grain doles will be addressed by firmer laws and wider powers being granted to lower officials and others to allow them to act without reference to the usual procedures. We have no doubt that the best way of dealing with the problem is to extract promises from the disaffected elements and to then release them to adjust to their communities in accordance with their lifestyle.

Community spirit will be maintained and improved by the provision of extra games and pursuits. Necessarily some of these will be violent amusements and others giving insights into the baser instincts and conduct of ordinary people. This is part of our lifestyle and we must learn to tolerate and welcome this as a staple of social intercourse.

In administration the greater influence and authority of Aquisgranum the city serving the interests of the Belgae, the Germanians and the Gauls is to be welcomed giving the Atlantic Isles a more central pivot to refer to for policy and trade. Similarly the transplantation of local tribal peoples, the Scotti, from the territories of south eastern Britannia around Camulodunum and Venta Icenorum to the furthest north can only be of benefit to all concerned. We are sure they will be welcomed by the Picts and the remnants of earlier peoples who went north in past times.

The Empires greatest achievement is in creating a diversity of peoples and beliefs. The steady flow of the skilled and able workforces from the lands around the Rhine and its northern and eastern neighbours we are sure will be augmented by more of these law abiding and peaceful tribes bringing with them their inclusive and benign gods. Moreover increased trade and contact with the horsed tribes far to the east has opened other wonderful opportunities. The Empire has little to fear from them.

There are other groups with other gods, including some who believe only in a single god. While the great majority of these are meek, submissive and helpful in their beliefs there are small number of extremists who give concern and who are both reluctant and unwilling to respect other gods and practices. Some have taken down bridges to make their places of worship and only allow marriage and child bearing within the terms of their own laws. More worrying is the lack of diversity in their relationships with others and secretive internal dealings. Nevertheless they are important to the Empire as a valuable source of slaves for the galleys and mines.

There are other issues for the Empire to deal with in the coming decade. The deforestation of much of the Isles is leading to difficulties in sourcing fuel and building materials. Also the more fertile soils of the lowlands are no longer giving the yields that they once did which means that the Province is failing to meet its revenue and export targets. The lack of maintenance of water facilities has led to breakdowns in some urban communities that are difficult to rectify. The calls on the legions have removed not only soldiers but the water engineers who have kept the systems running in the past.

Nevertheless the future is bright and the Empire has guaranteed that more coins will soon be had that although different will mean that the chariots and pack mules will soon be as busy as before.

How different it all seems from our modern world.
Posted by Demetrius at 11:24