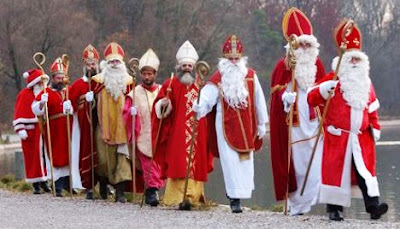 Today is St. Nicholas’s Day, celebrated around Europe and the Balkans by a number of Christian faiths. The story takes various forms and different aspects but essentially he was a one man benefits agency over the turn of the 3rd and 4th Centuries.

The story has taken another form in some particular Western countries with the Saint being better known as Santa Claus or metamorphosed into Father Christmas. In our way of thinking he comes up with gifts and goodies for the kids until they learn better.

This week we have stories that suggest that not only are saints or the lessons they taught not much taken notice of but that the essence of our society is taking away rather than giving.

One of our leading banks, HSBC (aka Shanghai Lil’s) has been fined and required to compensate by the FSA for £40 million because of gross malpractice. Apparently, after HSBC took over a known and respected financial firm NHFA in 2005 the targets they were set and the methods of operation they were encouraged to use royally screwed vulnerable 80 year olds trying to cover any future care costs.

Also, their has been disquiet in Parliament that because of the lack of financial controls in the companies that own Care Homes and the extractive policies they have adopted there is another major crash impending.

Southern Cross last year failed putting 31,000 very old in care homes at risk. This is a sector in difficulty and now failing to provide for or deal with the most extreme cases of need.

Not only have the aged had a pensions squeeze of one sort or another and the interest rates on savings drastically reduced many have been the losers in one bank fiasco or another.

Sir Fred Goodwin, late of RBS, may have accepted a reduced pension to the pittance of about half a million a year but some of his former customers were reduced to almost zero.

The reductions in local government spending are alleged to mean reduced care cover and less financial support coupled with higher charges with what is called “Care In The Community”. Many of those affected will be getting much less and their home districts now do not offer much in the way of community.

Those living in retirement flat developments also have been on the wrong end of property management services putting financial extraction to meet targets set by speculative investors way ahead of services. A large part of this sector is now in trouble and may end up controlled by some of the most rapacious private equity firms.

Recently, some of the stories emerging from the NHS and the hospitals have been suggesting that absence of care or of any expertise in dealing with the old in the context of a target driven management culture has caused major failures.

Perhaps all we can do is pray to St. Nicholas.
Posted by Demetrius at 17:06